CIOs and Managing the Innovation Cult

CIOs must beware the cult of innovationand stick to business content, a guest blog by Peter Waterhouse of CA Technologies 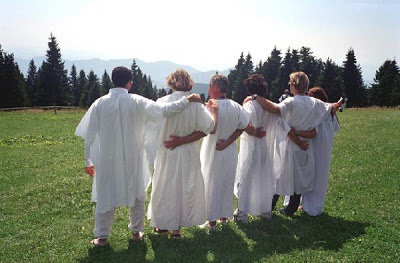 If you Google “CIO Innovation” you’ll get about 26 million hits. It seems you can’t have one without the other – they go together like mother and apple pie. Heck, they’re so aligned, we’re now comfortable replacing 'information' with 'innovation' in the CIO acronym itself. So go ahead and search “Chief Innovation Officer” – you’ll be amazed.

Now search for “innovation” across any technology business website and you’ll find reference to it everywhere. It’s like confetti at a wedding, liberally sprinkled – the magic fairy dust promising business growth, happy customers and productive employees.

It’s no surprise then that innovation is often illustrated by high-tech examples and mega success stories. Like the iWorld according to Apple and the social universe of Twitter – all strong (but somewhat hackneyed) examples of companies challenging the status quo and bending business models with new disruptive technology.

The Innovation Problem for CIOs

So innovation shouldn’t be a problem for the CIO and the IT team, right?  Well it better not be since it’s become such an accepted part of our vernacular that employees, customers and citizens expect and demand it. They talk about it at work – in presentations. It’s whispered in the hallways and debated by the water cooler – all hail the new idol to be worshiped – a new cult is born – Innovation.

The innovation cult presents a thorny problem for CIOs. Not only pandering to a mass following of devotees (who are now well versed in technology), but also reacting to new demands when people with influence join the movement. And you’ll know they’re part of the cult when the word innovative finds its way into every IT related conversation – usually prefixed by those immortal words “we need to be more…”

The easiest option of course is to blindly follow the cult by committing the IT organization to delivering more innovation. But there’s a problem. Not every CIO has access to the unlimited talent pool of a Google or Netflix, and even if they did, the operational tax  accrued over the years means much of the IT spend is dedicated to maintaining the “IT plumbing”. Also, just hoping that technology alone will provide the answer is a recipe for disaster. Consider, for example, a large auto insurance company who developed a superb mobile app to connect customers in an emergency to their call center, but who didn’t take into account customers’ have a lot more on their mind than downloading an app after a car accident.

Challenging or trying to control the cult won’t work either. Tech adoption is happening outside of traditional IT, while the CIO and the IT team is often being viewed in the same context as the IT plumbing (systems and infrastructure) – which as we all now is now in the “easily replaced” category. This latter point is nonsense of course, since the era of massive technology change and disruption make strong leadership in areas such as sourcing, business process change and integration more critical than ever before. But as with any dangerous cult, those of the tech innovation kind aren’t always founded on common sense principles and sound logic.

So when it comes to managing the innovation cult, CIOs must accept that they’re no longer in the IT plumbing business, but that their primary goal is to facilitate the use of technology innovations to create important differentiators. Those that don’t will wither and die, while those that survive this first critical test will guide the business using plain old fashioned common sense.

Common sense starts with understanding the context in which the application of technology can enhance the business. That sounds pretty straightforward, but with  all the innovation rants and raves it’s so easy to get lost in the noise. So imagine for a moment you’re a CIO working in the mining sector and you present an “innovative” BYOD strategy to your CEO – would they really care? But now imagine discussing how the application of low cost industrial sensors (M2M/Internet of Things) in heavy excavation equipment would help increase ore yield potential and reduce capital expenses. Now, that’s what I call an attention grabber. Similarly, imagine working as an IT leader for an airline company and extolling the virtues of a comprehensive new mobile development strategy that will “delight your customers” (another cult like term), then being painfully rebuked because customer service is diametrically opposed to a low cost / no frills strategy. Ouch!

Understanding business context is only the start. Great CIOs will go much further by challenging what I commonly refer to as the “ain’t broke, don’t fix it” mentality. By this, they’ll question the merit of the status-quo and stability by seeking out opportunities for change and disruption - using new technologies, yes, but firmly focused on how they can be “innovatively applied” to increase both business and scope.

This is a tough journey for many CIOs, involving hard decisions in everything from organizational structure and talent dynamics to agile development, vendor management and sourcing. But all this counts for nothing if you forget the golden rule - today’s technology movement (however innovative and unorthodox) will, like any cult, quickly be superseded by the next shiny new piece of wizardry.

The innovation cult is dangerous, so avoid becoming enslaved by a word that, in reality, has lost meaning. At the end of the day, results will be measured by your ability to accomplish business results; not your technical achievements. Unfortunately that’ll only get harder as the cult intensifies.